Onyema Anene Farrey is admitted to practice in every trial court in the state of Georgia, the Georgia Court of Appeals, the Georgia Supreme Court, the federal courts of Georgia (northern and middle districts), and the U.S. federal 11th Circuit Court of Appeals.  She has filed several appeals cases seeking justice for her clients and obtained favorable results which resulted in the creation of new case law for other litigants to rely upon in their cases.

Onyema Anene Farrey works full time as the Founding Attorney of the law firm of Anene Farrey & Associates, LLC. During the early years of her career, she handled a wide array of cases including defense of minor criminal offenses and traffic citations, evictions, civil litigation, foreclosure defense, and family law.  Over the years, she has developed a niche area of practice which now focuses on family law matters ranging from domestic violence and protective order cases to complex child support matters, high conflict custody battles and high-asset divorce cases.  She is well-known and respected in the legal community as a very intellectual and skilled Attorney, and quickly gained a reputation of being known as a fearless litigator because of her track record.

In addition to practicing law, she has also worked as an adjunct professor at two major universities where she taught college students in the criminal justice department. Onyema Anene Farrey serves her community by participating in several speaking engagements, public appearances, and conferences to educate the public on pertinent issues in the law.  She is a member of the Clayton County bar association and a proud member of Delta Sigma Theta Sorority, Inc.

In December 2020, Onyema Anene Farrey was sworn in as an Associate Judge with the Clayton County Magistrate Court where she will preside on the bench part-time to serve her community. Her mantra when serving on the bench is to lead with ensuring efficiency and fairness in every case. 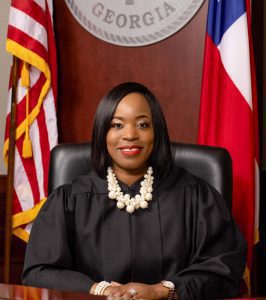