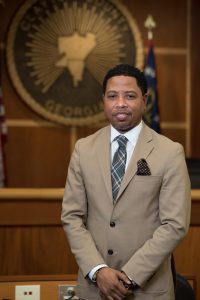 The Clayton County Government· is excited to announce that we are seeking to partner with property owners for additional ways to enhance economic development in Clayton County. To that end, Nickel Works Consulting has been selected to conduct a feasibility study to assess the potential for a new Community Improvement District (ClD) in Clayton County in the Highway 138 corridor. This would be the 2nd CID in Clayton County. In 2015, Clayton County Board of Commissioners approved the Airport South CID located in the Phoenix Boulevard Office Park area.

Based on feedback from property owners in the proposed Highway 138 CID (see map below), some of the ideal projects for the CID to embark on are beautification and enhanced streetscapes, roadway and traffic improvements, and public safety initiatives. The collected revenue can leverage funds from local, state, and federal entities to cover a portion of the costs for these types of projects and others.

An estimate of your CID Investment can be found in the letter that was mailed to your property address. This amount is based on Clayton County’s most recent assessed value for your property. Your feedback and participation are critical to our success.

Below you will find the consent form that must be printed and mailed to:

A Nickel Works team member will be in touch with you to confirm receipt of your mailing and answer any questions.

We look forward to your support in the CID feasibility study and participation in the proposed CID.

What is a Community Improvement District (CID)?

A Community Improvement District (CID) is the most powerful public-private partnership tool today that is used successfully around the country to revitalize activity centers. It is a proven and effective method for financing improvements that directly enhance property values by allowing property owners to determine how funds are spent in their area. CID funds can augment existing services such as public safety and they can also be used to leverage additional public and private funds. Conservatively, CID funds can be used to leverage such funds at a ratio of 10 to 1.

How is a CID created?

A CID is a geographically defined district in which commercial property owners vote to impose a self-tax. To enact a CID, a simple majority of affected property owners having 75% of the assessed property value of the area must consent which is then ratified by the governing authority. Funds collected by the tax commissioner are disbursed to the CID which is administered by a board of directors that are elected by the property owners.

What types of improvements can a CID make?

The Georgia Constitution specifies that funds collected through a CID may be used for:

How much is the CID investment and how is it calculated?

The annual CID investment will be included on your County Property Tax Bill. After the CID is created and a Board of Directors (BOD) is formed, the BOD sets the annual millage rate for the CID investment. It is recommended to be set between 3 and 5 mills. 5 mills equates to approximately $2,000 per $1,000,000 of the Appraised Property Value. The millage rate of CIDs in Georgia range from 3 to 5 mills.

When is the first CID investment due?

The goal is to have property owner consent forms by the deadline provided by the Tax Commissioner’s Office, which is typically April of each year. This allows the CID investment to be included on the County Property tax bill for the current year; therefore, when property taxes are paid directly to the County, the CID investment is included. The Tax Commissioner transmits the collected funds directly to the CID to be used ONLY within the boundaries of the CID area for expenditures in accordance with the purposes of the CID.

How long will the CID investment be paid?

CIDs are created for six years as stated in the state legislation. At the end of six years, property owners can vote to continue for another six years or vote to dissolve the CID. No CID in the state of Georgia has ever voted to dissolve. The Cumberland CID was formed in 1988 and is the oldest CID in Georgia.

Why is there a notarized Written Consent of Owner Form?

Why should a Property Owner join the CID?