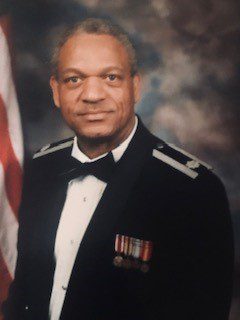 Lieutenant Colonel Charley James graduated with honors from Gadsden State Community College and Jacksonville State, because of the draft, he enlisted in the Air Force in September 1969.

Lt.Colonel James’ Military Honors include (1) Air Force Commendation Medal and (7) Meritorious Service Medals. In 1968, he was selected as the U. S. Air Force Team Chief to brief the Bulgarian Minister of Defense to help prepare Bulgaria to become a member of NATO. He retired from the Air Force in 1999 after 30 years of service.

In 1999 Lt. Colonel James began teaching at Morrow High School where he was a Senior Air Force Junior ROTC Instructor. He was selected as a Master Instructor by ROTC Headquarters in 2010.

Major ROTC Community Relations Projects: participated in Toys for Tots, established a food pantry in the ROTC room and distributed food to local families, sent over $500 worth of items to troops in Iraq, wrote letters to troops in Iraq, visited local Senior Centers, tutored elementary and middle school students, sponsored luncheons for veterans on Veterans Day, collected money for the Cancer Society, Heart Association and Saint Jude, and so many more.  Colonel James retired from AFJROTC in December 2012.

He is still very active in the community as he works with the J. Charley Griswell Senior Center with their annual Veterans Day Program, serves as a Deacon at New Vision Christian Church, and serves as a mentor and instructor for young boys in the church’s Circle of Sons Program. He is a member of the church’s Drama Program and has participated in numerous productions. He and his wife are also leaders of the New Vision Marriage Ministry. He established a group on Facebook for former ROTC students. Currently, there are approximately 100 of his former students in the group in which Lt Col James mentors and provides guidance in spite of the age difference.

He is a member of the Kappa Alpha Psi Fraternity, American Legion, and the Disabled American Veterans Organizations. Lt. Colonel James has been married to Doris A. James since September 202 and together they have three children.