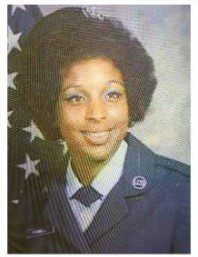 Veteran of the Month, April 2022
Chaplain Deborah A. Powell

Deborah Powell was born in Brooklyn, New York. Served in the United States Air Force Active Duty and Reserves. After leaving the Air Force she obtained a Degree in Criminal Justice. Ms. Powell gained employment at the Department of Defense and retired after 25 years.

She is a licensed and ordained Minister for the New Jerusalem Holiness Church /Hinds’ Feet Ministry Inc. Her outreach to the community began in Philadelphia’s Love Park where she helped to feed the homeless and provided them with spiritual guidance. Ms. Powell ministered to inmates in the prison system worldwide and was the Prison Evangelist Radio Broadcast Host for The Hem of His Garment.

She is the business owner of Blessing Fashions and Gifts. On a Sunday morning service, our Pastor Rachel Harris said that the Lord was calling the ministry to relocate to Georgia.  The entire congregation was given the invitation and after much prayer, she accepted and had to leave family and friends behind.  Ms. Powell re-established her business in Georgia by opening up an exclusive boutique in Clayton County.

Under the direction of her Pastor, she helped to feed and aid the homeless who lived in the woods of Clayton County. Ms. Powell volunteers to run the church service for Clayton County inmates every first Monday of the month.

After several years of serving at the jail, she applied for a full-time chaplain position and was accepted. She was afforded the opportunity to have Bible Study with the female inmates on a weekly basis. Chaplin Powell became a member of the organization, Veterans Helping Veterans, where she serves as a chaplain. She participated in the distribution of food and clothing at the Riverdale Town Center.

She also handled the collecting of book bags and school supplies for students.  She served her community by distributing food boxes to those in her subdivision and donating clothing to the homeless veterans. Chaplain Powell sent out cards of encouragement to those who were sick or had lost loved ones. She did wellness checks for veterans and had prayers with those who desired it. Chaplain Powell has also donated hats and gloves for those who were under the direction of CASA and visited nursing homes on Valentine’s Day to distribute flowers and candy to veterans.