Judge Brad Gardner obtained his B.A. in Sociology from Alabama A&M University in 1997 and his Juris Doctorate from Emory University School of Law in 2000.  He has been a member in good standing with the State Bar of Georgia since 2000.

He began his legal career as an Associate Attorney at D. Lowell Thomas, P.C. While employed by Dwight Thomas, Judge Gardner conducted jury trials throughout the Superior and State courts of Georgia. He has federal legal experience representing clients in the courts of Georgia, South Carolina, and North Carolina. Additionally, he has authored successful appeals in the Georgia Supreme Court and the Eleventh Circuit Court of Appeals.

Judge Gardner started his own law practice in 2007 wherein he represented clients in general civil and criminal matters.  During this time, he also began working as a part-time judge in the Magistrate Court of Clayton County.  He gained judicial experience by conducting hearings in civil trials, dispossessory proceedings, child abandonment proceedings, temporary protective order hearings, bond hearings (sitting by designation as a Superior Court Judge), abandoned motor vehicle writs, first appearance hearings, code enforcement hearings, and civil motions hearings.  Needless to say, this judicial experience was varied and impactful on his development as a judge and lawyer.

Judge Gardner hopes to bring his twenty-years of varied legal experience to this current appointment for the benefit of the citizens of Clayton County.  He is truly grateful for this opportunity. 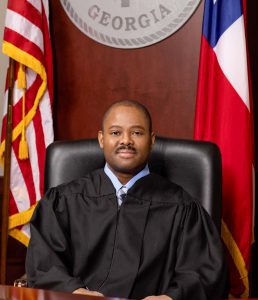