Chief Judge Keisha Wright Hill has been a resident of Jonesboro, Georgia for over 30 years.  She attended Lovejoy High School, where she graduated with Honors in 1994.

In 1998, she graduated from the prestigious SPELMAN COLLEGE, located in downtown Atlanta, earning a Bachelor of Arts degree in Psychology.  She received her Juris Doctorate from NORTH CAROLINA CENTRAL UNIVERSITY – SCHOOL OF LAW, located in Durham, North Carolina in 2002.

Prior to taking the bench, Judge Wright Hill was in private practice for 18 years.  She started her own law practice on February 4, 2003, just three short months after receiving her law degree.  Judge Wright Hill has taught Introduction to Criminology and Criminal Justice courses at Atlanta Metropolitan College and looks forward to teaching again on the collegiate level.  Throughout her career she has practiced in the areas of criminal law, civil litigation, bankruptcy, family law, and entertainment law.  While in private practice, Judge Wright Hill specialized in Family Law which covers the areas of Divorce, Child Custody, Child Support, and Juvenile Law for 15 years.

On March 12, 2019, Judge Wright Hill appeared along with three of her law school friends and fellow judges as a guest on “The Steve Harvey Show!”  The four judges affectionately named “The Golden Girls” renamed themselves and are now known as SISTERS WHO RULE!  They are Motivational Speakers who speak across the country year-round and look forward to working on future projects together.

On June 9, 2020, Judge Wright Hill won her first judicial election and was elected as Chief Magistrate Judge by the citizens of Clayton County.  She is only the third African-American in the county’s 162 year history to hold the seat.

Judge Wright Hill is married and has four children.  She is an active member of Christian Life Center Worldwide and serves on the church’s Event Planning Ministry.  In addition to being in the courtroom, Chief Judge Wright Hill enjoys traveling the country as a Motivational Speaker encouraging, educating and inspiring children, teens and adults from diverse backgrounds. 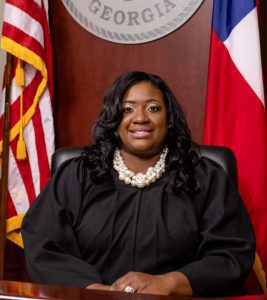